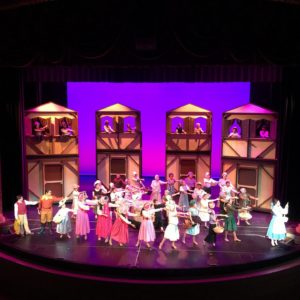 The Hawaii Theatre Center Enriching, Educating, and Engaging Our Keiki through the Arts educational programming is an annual series of affordably priced, live theatre productions for audiences of all ages: from the very young to the young at heart. Since 2007, the Hawaii Theatre Center educational programming has welcomed over 100,000 attendees access to the arts, especially drama and dance. This annual series of the Summer Intensive Theatre Camp, Theatre for Young Audiences Series and the annual Punchbowl Music Festival help to reach more than 12,500 Pre-K to 12th Grade school children and their families each year.

Hawaii Theatre Center’s arts education program can open the door to many of those who are often excluded from the benefits of arts participation. This is accomplished by greatly reducing cost barriers, making high-quality, arts opportunities more accessible to schools, and reaching out to underserved populations.

The Summer Intensive Theatre Camp is an annual 8-week Theatre Camp in June & July which hosts 50 students between the ages of 5 to 18 who are immersed in a rich theatrical experience each week. The camp is facilitated under the direction of the Pacific Academy of Performing Arts (PAPA). Students will participate in courses, workshops while learning the basics of performing on stage, vocal creations, public speaking, and choreography.

The Theatre for Young Audiences is a series of productions with tickets that are offered at a reduced cost that make them accessible to all children and their families who might not otherwise be able to afford to attend such productions. Productions include a fall musical, PBS Kids Mr. Steve , Hawaii Opera Theatre Opera Express, spring musica, and a Shakespeare performance.

The Annual Punchbowl Music Festival is a two-day festival established in 2002 to showcase approximately 200 young musicians from the band programs of three (3) nearby Title I Public Schools: Central Middle School, Kawananakoa and Stevenson Middle School. The annual festival has been at no charge to the schools or attendees, giving an opportunity for these young musicians from underserved communities the opportunity to perform in an acoustically excellent venue for their peers, teachers and families.

2020 – 2021 Hawaii Theatre Center Enriching, Educating, and Engaging Our Keiki through the Arts

Disney’s Moana Jr – July 17th to 26th, 2020 – The musical adaptation of the 2016 Disney animated film, bringing the adventures of Moana and her village of Motunui to life onstage. Moana JR. features all the beloved songs from the film, written by Tony®, GRAMMY, Emmy, and Pulitzer Prize-winning composer Lin-Manuel Miranda, Opetaia Foa’i, and Mark Mancina, including “How Far I’ll Go,” “Shiny,” and “You’re Welcome.”

Disney’s Tarzan: The Stage Musical – September 23rd to 27th, 2020. – Based on Disney’s epic animated musical adventure and Edgar Rice Burrough’s Tarzan of the Apes, Tarzan features heart-pumping music by rock legend, Phil Collins, and a book by Tony Award-winning playwright, David Henry Hwang. High-flying excitement and hits, like the Academy Award winning “You’ll Be in My Heart,” as well as “Son of Man” and “Two Worlds,” make Tarzan an unforgettable theatrical experience.

PBS Kids Mr. Steve – October 14th & 15th, 2020 (Student Matinee Only) – Featuring Steve Roslonek, also known as Mr. Steve, the popular national host of PBS Kids. This charismatic singer/songwriter shares his inventive, original music and lyrics during interactive, high-energy performances that inform while they entertain. Kid-friendly lessons in science, literacy, environmental issues, and important character values are all subjects for Mr. Steve’s ingenious songs. Children are invited to sing and dance with him all along the way.

Hawaii Opera Theatre Opera Express – November 4th & 5th, 2020 – Collaborating with Hawaii Opera Theatre on a kid-friendly adaptation of an opera that engages the students listening skills. Teachers are provided the lyrics and the soundtrack to the opera, which is played prior to attending the performance.

Spring Musical – March 10th to 14th, 2021 – A live spring musical or play onstage at the Hawaii Theatre for audiences of all ages.

Annual Punchbowl Musical Festival – April 6th & 7th, 2021 – This annual two-day festival was established in 2002 to showcase approximately 200 young musicians from the band programs of three nearby Title I Public Schools: Central Middle School, Kawananakoa Middle School, and Stevenson Middle School. The annual festival has been sponsored and hosted by Hawaii Theatre Center since 2007 at no charge to the schools or attendees, giving an opportunity for these young musicians from underserved communities to perform in an acoustically excellent venue for their peers, teachers, and families.

Shakespeare Production – April 14th & 15th, 2021 (Student Matinee Only) A production of a selected Shakespeare play for grades 6th to 12th.

*All productions and dates are subject to change with notice*

School matinee performances are priced at $5 per ticket with teacher receiving a free ticket for every 20 students they bring. Public performance tickets are also affordably priced, starting at $10 for adults and $5 for students.

SUPPORT CHILDREN'S THEATRE EDUCATION
"To enter a theatre for a performance is to be inducted into a magical space, to be ushered into a sacred arena of the imagination..."

"Growing up in the theatre saved my child's life. He found his calling, he found his tribe. Thank you for being there for us"

"The biggest adventure you can take is to live the life of your dreams!"