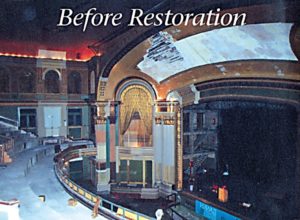 Hawaii Theatre Center is dedicated to providing a broad range of entertainment, cultural and educational experiences to benefit the people and visitors of Hawaii in a facility of recognized excellence. It is our mission to provide arts education to Hawaii’s youth, promote the revitalization of downtown Honolulu and stimulate nightlife while enhancing the overall quality of life in Honolulu.

Coined the Pride of the Pacific

The historic Hawaii Theatre is owned and operated by the Hawaii Theatre Center, a 501(c)3 nonprofit organization, and hosts over 100,000 guests annually. Built in 1922 by Consolidated Amusements of Honolulu, Hawaii Theatre was established as a venue for theatre, popular entertainment and film. In the mid-1930s, the theatre became a predominately popular grand movie palace and remained such until the advent of television in the 1950s.

As television grew popular, Hawaii Theatre slowly debilitated as a movie palace and Consolidated Amusements announced the theatre closing in 1984. Pending its disposition, the building was nurtured by the Aloha Chapter of the American Theatre Organ Society, ATOS. ATOS interest was anchored by the continued residence of the Robert Morton Unified Orchestra Theatre Organ ¬– one of two theatres Consolidated had brought to the islands in 1922.

Protecting the Future of Hawaii Theatre

In 1984, citizens dedicated to protecting the theatre from demolition formed the Hawaii Theatre Center, HTC. HTC obtained both the theatre itself and sufficient landbase to insure future viability.

In 1986, the Hawaii Theatre and the adjacent Austin, Pantheon and McLean Buildings were purchased. Hawaii Theatre continued to operate on a limited basis until the fall of 1989, when it was closed for renovation.

After an award-winning interior renovation led by Malcolm Holzman of Hardy, Holzman, Pfeiffer Associates (New York), the Hawaii Theatre was rededicated and re-opened on 26 April 1996. Since its dedication, the theatre has once again become a popular venue for national touring shows, theatre, concerts, industrials, film, television and has attracted hundreds of thousands of patrons back through its doors to witness its resurgence as Honolulu’s preeminent venue.

On November 4, 2004, the Hawaii Theatre Center completed its restoration of the exterior of the Hawaii Theatre. The facade restoration included the stabilization and repair of spalling plaster, restoration of architectural details, new paint, a restored flagpole, a newly manufactured replica of the familiar art deco neon marquee with computerized LED signage and a newly manufactured replica of the hallmark “HAWAII” vertical neon sign.

The Hawaii Theatre restoration is a tribute to the entire community, and was restored for all to enjoy, kama`aina (locals) and malihini (visitors) alike.

One of the Outstanding Theatres in America

We thank the many artisans, directors, employees, volunteers, patrons, visitors and community members who have shared their wealth, work, and wisdom to grace the “Pride of the Pacific,” the historic Hawaii Theatre.

Mahalo to everyone involved in helping to restore beautiful Hawaii Theatre.