The Gallery At Hawaii Theatre

Support The Hawaii Theatre Through Your Purchases

We can even prepare your items for shipping as gifts, and send them on your behalf with a gift card.  Support your local non-profit Hawaii Theatre Center with your purchase today.  During certain show days, we close the Gift Shop to the public in order to provide a private catered experience to our donors who are members of our exclusive donor groups, including Corporate Loge Members, and donors in the Visionary, Executive Producer and Producer level members.  Members are able to reserve the space for use on a first-come, first-served basis.

The Gallery at Hawaii Theatre is proud to present “Hawaii Epiphany” a solo exhibition by Kosta Kulundzic focusing on the French-Serbian artist’s appreciation for the overwhelming beauty and energy of the Hawaiian Islands. The exhibition is set to open on Saturday, August 1st, 2020 and will run through Saturday September 5th, 2020.    The exhibition “Hawaii Epiphany” is a reflection on the mysticism and grace that permeates Hawaii, its nature, and its inhabitants. Almost in the manner of Christian icons, Kosta creates paintings that place humans at the center of a strong spirituality, but this time it seems to be the result of humanity’s immersion in a unique and breathtaking nature. The grandson of an orthodox priest in former Yugoslavia, Kosta was nurtured by the specters of religious warfare, Christian dogma, and the burdens of martyrdom. For several years Kosta was working with the representations of Christian saints and mythologies but relocated from Paris to Oahu in 2016 to teach at The University of Hawaii at Manoa. Moving to Oahu, his art has taken a full one-hundred-and-eighty-degree turn. The beauty of the Hawaiian Islands and their inhabitants has completely changed Kosta’s color palette approach to portraiture. The solo traveling show debuted last summer in Seattle at the Gallery Suzanne Zahr, will stop at The Gallery at Hawaii Theatre for the month before continuing to Paris at the Galerie Brugier-Rigail in June with the publication of a monographic book. 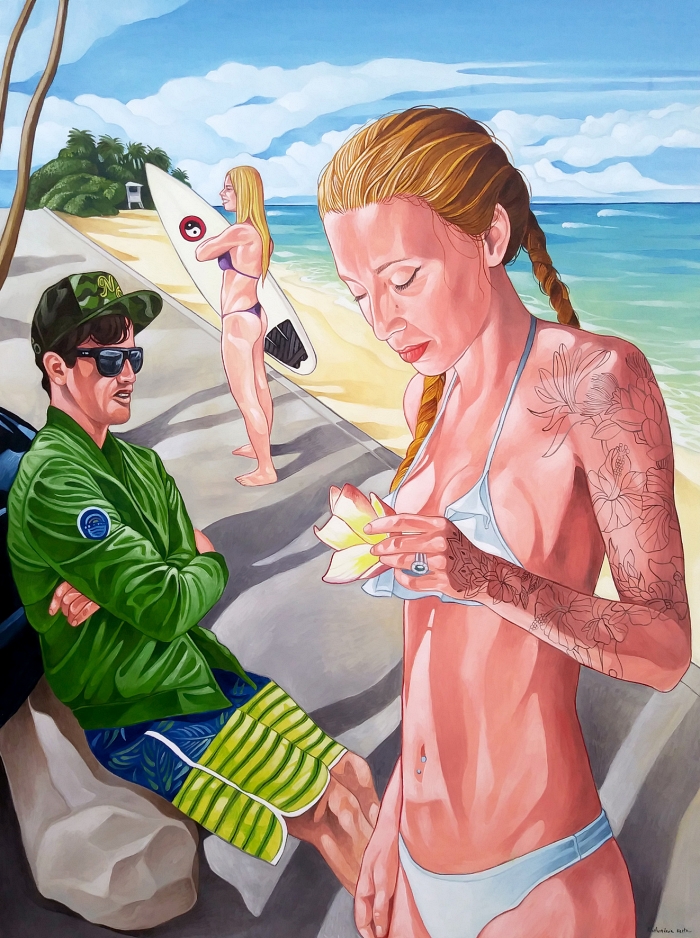